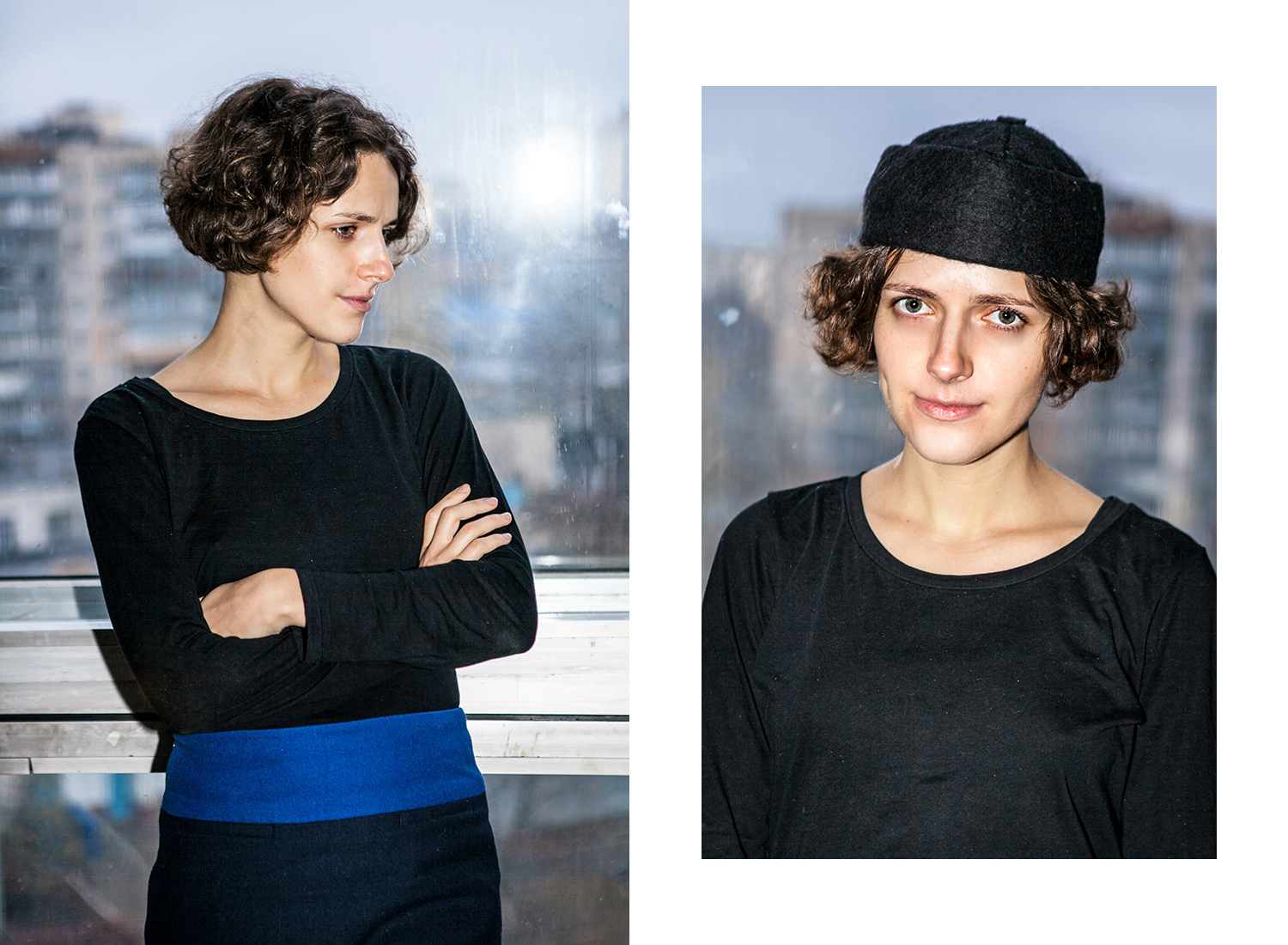 Anna Zvyagintseva’s works always draw a lot of attention at exhibition spaces of all scales and ambitions. She creates sophisticated, profound and clever art. But what’s her secret? We’ve tried to find out.

Anna, let’s begin with your latest nomination for PinchukArtCentre Prize. Your work obviously stands out from majority that was carried away by reflection on recent social&political events in Ukraine and the world. So was this avoidance your conscious choice or the general state of mind?

These issues influenced my work as well. At first sight everything does seem pretty – fine pencil drawings, light room. But if you look closely, don’t you feel that there’s something wrong? Don’t you wonder why these fragments fell off? Why does this peaceful image fall apart? At first it looks like a couple of nice pictures, they are even hung or placed so that visitors can easily walk along the walls. But there’s an obstacle – you can’t come closer to the pictures on the walls, as you hit podiums with the fragments of them that had fallen off. I.e. it’s up to you whether you choose to ignore “the shadow of the disaster” and satisfy yourself with the seemingly calm sequence of images, or stop and try to apprehend the artwork as a whole. In the second case it will be difficult to separate it from “the events in the country”.

A couple of years ago as a member of the curatorial group “Hudrada” you made a project in Crimea. It was dedicated to conquering public and political territories. At that time was it a need or another evidence of artists’ capability of foreseeing the future?

The exhibition “Disputed Territory” only partially raised the subject of territory in geographic sense. In this project we discussed various disputed territories: public and private space, human body and gender, migration and political conflicts. We were invited to do “something” particularly at the Sevastopol Art Museum. A problem of disputed territories emerged in the course of our work, as it basically lies there on the surface – both Crimea and Sevastopol are the battlefields of identities, and a museum is a “disputed territory” for contemporary art. Many people do tend to think that artists foresaw something. During the Maidan a wave of publications about the cases of “artistic predictions” emerged, and it hasn’t stopped yet. But an artist is not a prophet, he is the same citizen as you are, and just lives, observes, analyzes – naturally, it all influences artwork. Perhaps an artist has a keen desire to raise questions, to doubt things, to search for new ways to express own doubts. An artwork may be made in a form of a question. And the reality may give an answer to it after a while.

Kyiv Biennial 2015 was quite an ambiguous event. In your opinion, did it manage to fulfill its educational ambitions regarding contemporary art? As a curator, could you please tell us about its main achievements and failures?

Why do you think it was ambiguous? There was no decent expert opinion on it. A vague dissatisfaction – yes, it was easy to notice in many people. But it was exactly vague, uncertain. “The School of Kyiv” proved to be an outstanding event, and Kyiv’s art community couldn’t find words to describe it. It was a new, unusual experience for this city. The discussion between curators, guest artists, theorists, and research writers went far beyond contemporary art. Some of the guests are prominent figures in their fields. Those, who influence “the climate of the epoch”. The program was quite intense and demanding to audience, with several important events every day. It was a brand new experience for the art community.

It was obvious that the preparation of the Biennial had gone in extreme conditions. One could see it in such details as belated announcements or the lack of information in media. Maybe there was a reluctance to explain certain things to a random public. Though, it’s possible to stop treating audience as an infantile one. What if it changes everything in one moment?

Speaking of conflict issues in Ukrainian contemporary art, could you please tell us what problems vanished, and what emerged in last two years? Are there more specifics now than abstract problems and discussions?

It’s a good thing if the art itself has an internal conflict. I’m interested in art that makes you feel uncomfortable, and even when you leave an exhibition, it buzzes like a mosquito in your ears, so you can’t ignore it. Of course, one can slap this mosquito. But you probably mean something else. In Ukraine you cannot hide from the subject of war. While “a conflict issue” in contemporary art seems to be something of a free choice: as if you might decide between conflict and conflict-free issues. I’d say that recent “regular” Ukrainian group exhibitions proved to choose simplicity over complexity. To avoid touching old wounds. To remember about citizenship, but to make politics “easy”, and to go deep only into private problems.

Let’s say, the war is never a subject of free choice. You may only choose an angle of observation. Sometimes it’s hard to tell that an artwork concerns war, but even the calmest picture of daily life has been irreversibly altered.

Why do you work alone as a painter, but in a group as a curator? In addition to organizational benefits, are there any emotional advantages?

It’s very difficult and interesting to work in a group. Moreover, it’s way slower than working alone. Curator’s job often implies creating collective situations. But now there’s nobody strong and competent enough to create such a situation for others. And there’s no group to gather and create such a situation for you. It’s us who put each other in the context. And emotional advantages are the case when you have interlocutors. But if you don’t have them, it’s completely different, since the most important thing is what these interlocutors are talking about. In this conversation ideas and positions are being born, or the whole thing is only a meaningless party. This is where an art environment emerges, even if it’s very small.

One of the latest public discussions concerns whether artists should take money (prizes or grants) from foundations that belong to oligarchs. What do you think about it?

This discussion is not that new. It started at least five years ago. And my opinion is quite obvious since I participated in the competition for the Pinchuk Prize and won a Special Prize and a Public Choice Prize. But it doesn’t mean that I participate in any competitions. E.g. I didn’t compete for the Firtash Prize. When public state institutions are weak, the private ones face higher demands. In general, there are quite a few options for financing art in Ukraine: money from the state budget, oligarchs’ foundations, collectors from the middle class, Western institutions – as far as the latter relates to Ukraine, of course. How’s the money from the state budget is allocated in our country? And what’s the situation with the local art market and collectors?..

To your mind, can an artist nowadays work only with one medium? What are your personal benefits of creating art with the help of photo, installation, and drawing? Is it your way to find right tools or do you just make such polyphonic statements?

Of course, he can, it’s not prohibited. I usually work with one medium too – with a sketch, a quick drawing. But it’s not always easy to notice. Because I turn my drawings into metal sculptures, murals, slide projections, embroidery and many other things. I rather explore the drawing and its subject from different angles.

In your opinion, what tool is capable of popularizing contemporary art with wider audience? And is it worth doing at all, considering that they don’t teach art history at school and even at liberal arts universities? Maybe it makes sense to begin with the basics, with acknowledged masterpieces?

We need institutions. Nothing will work out without them: neither contemporary art, nor acknowledged masterpieces. 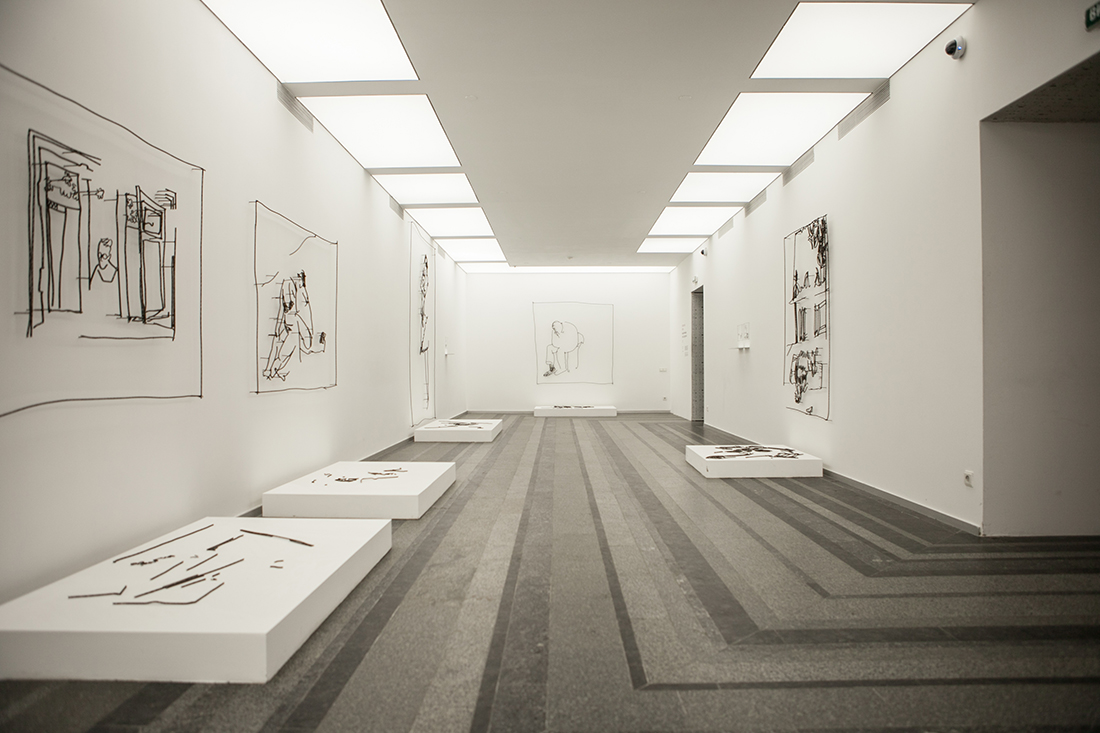 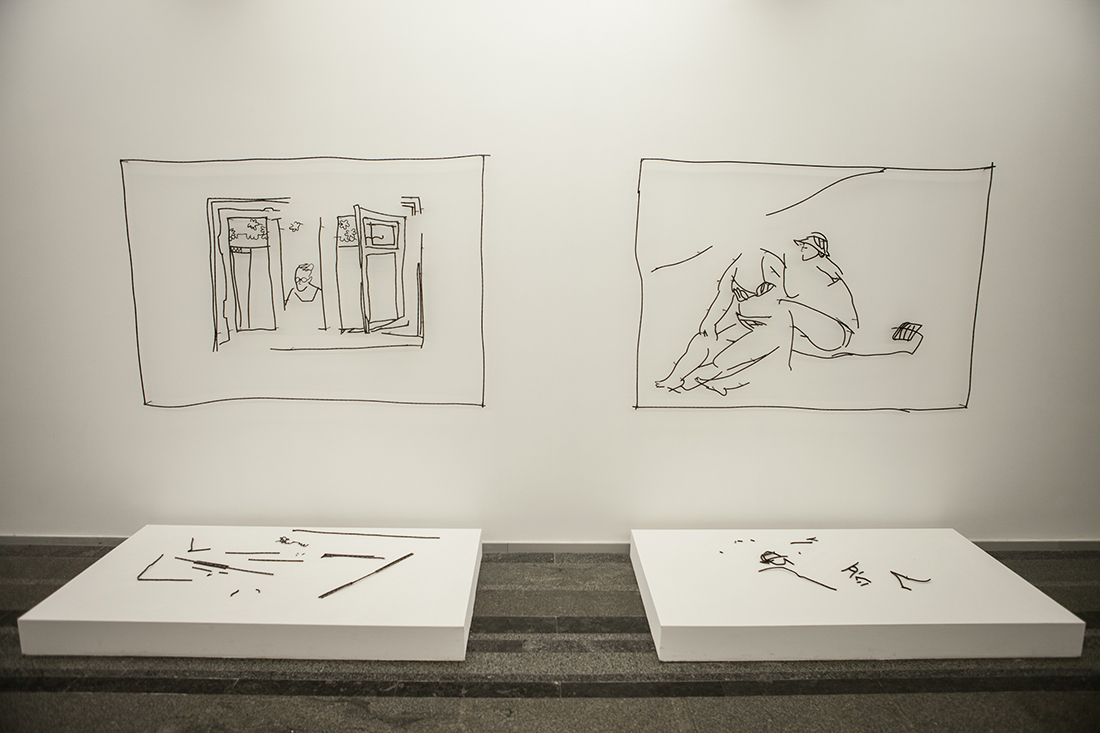 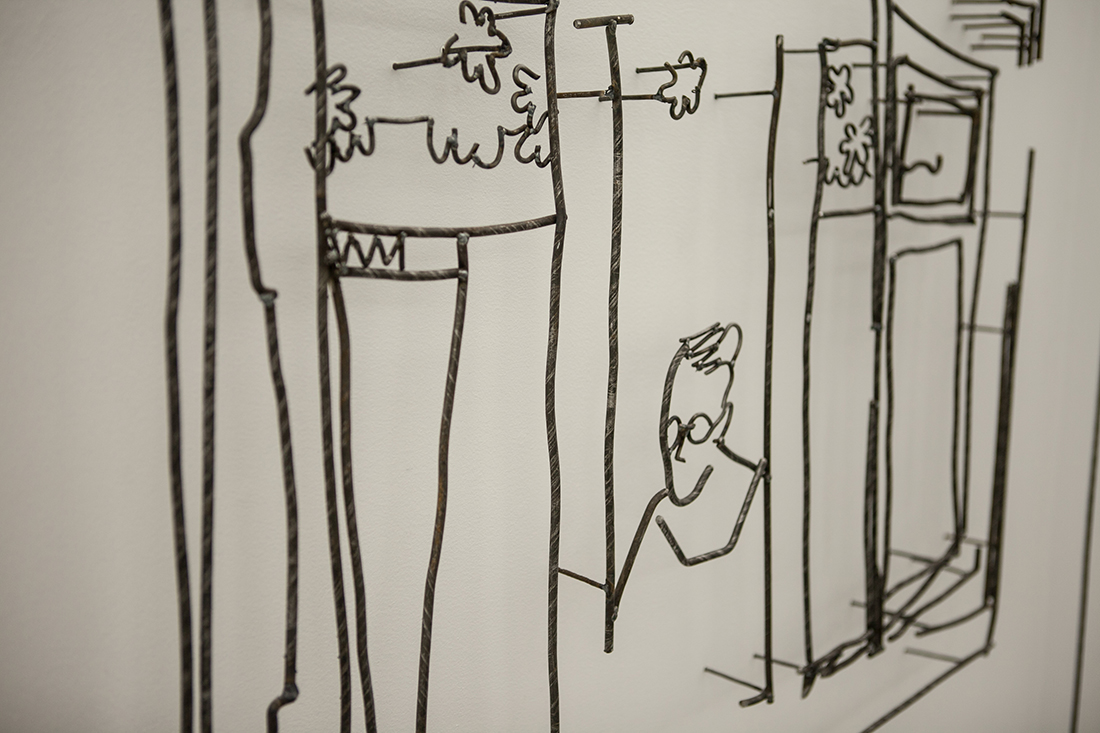 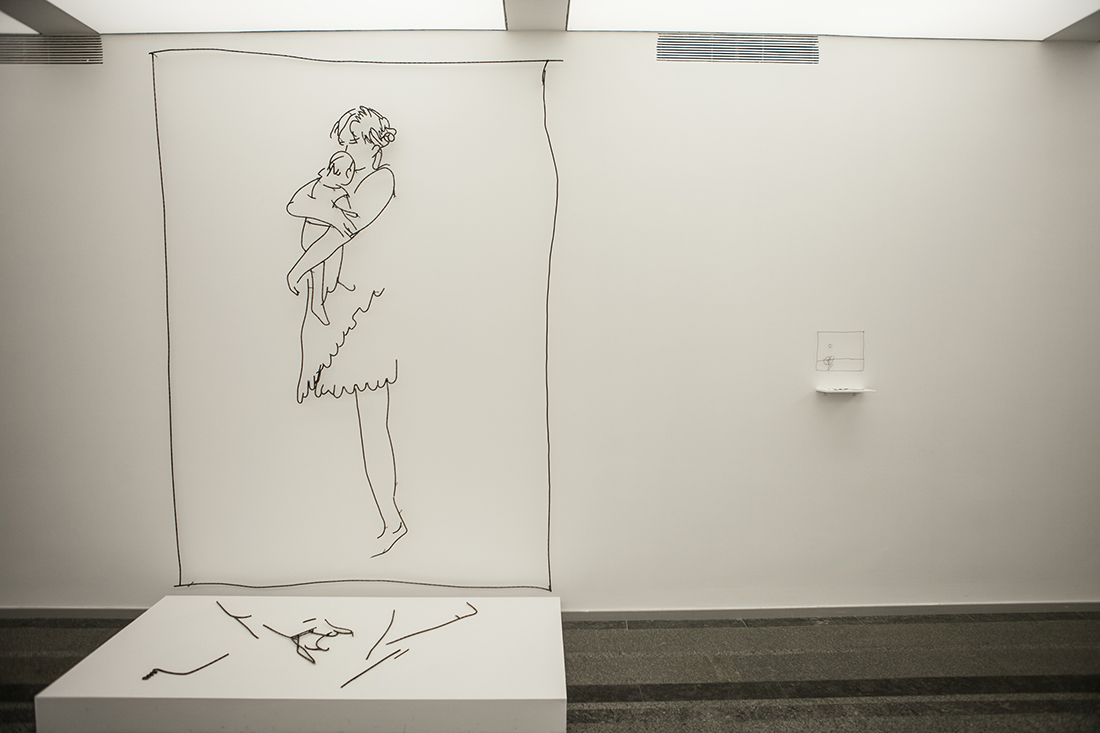 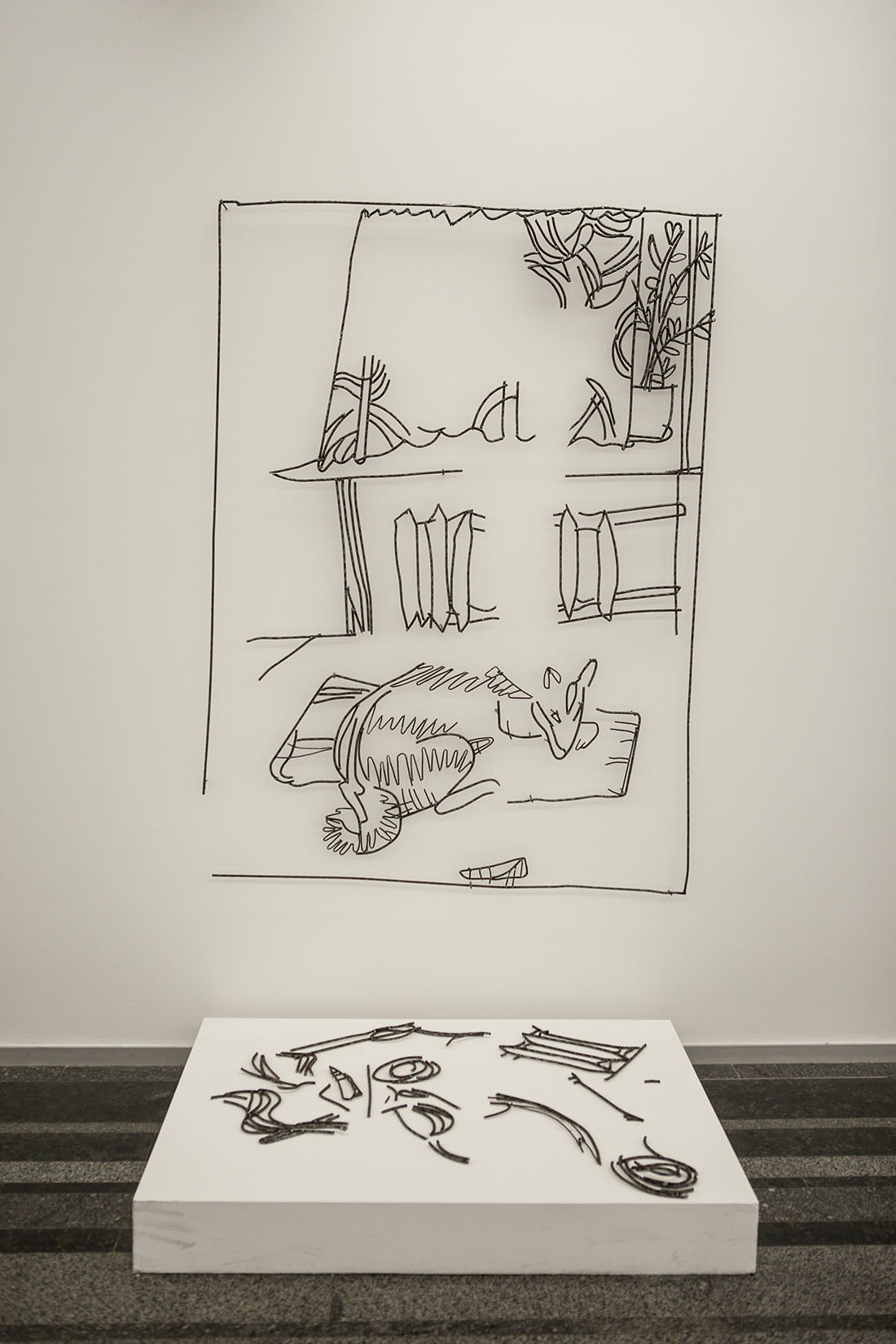 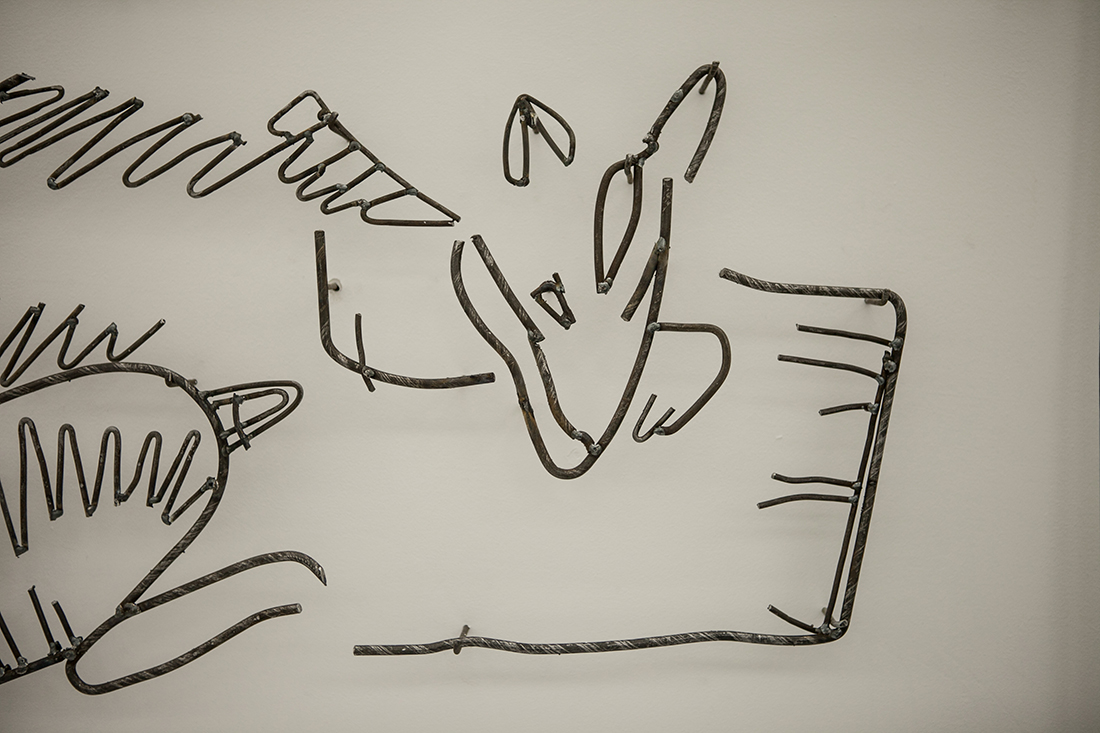 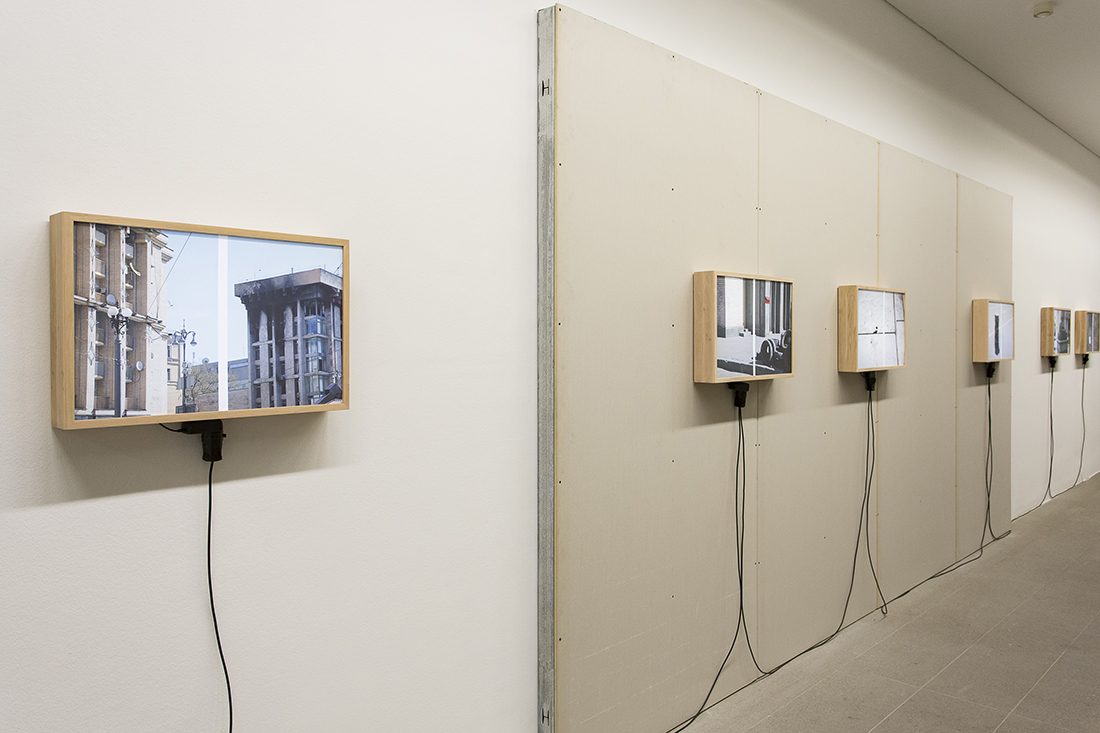 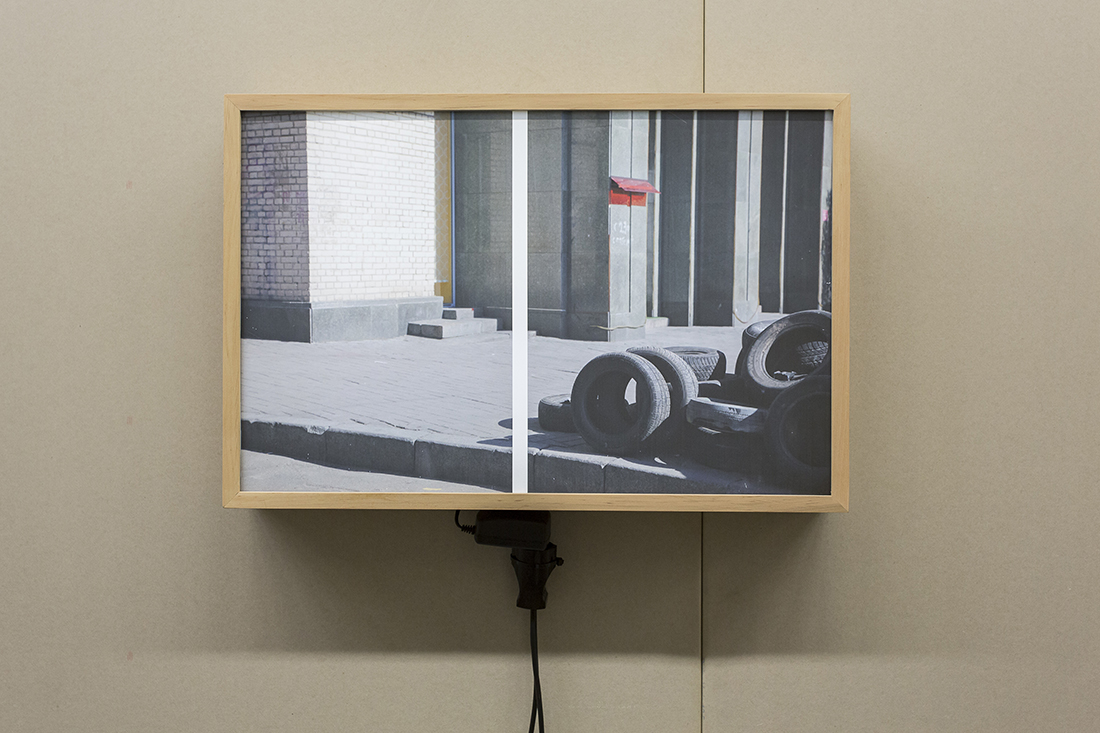 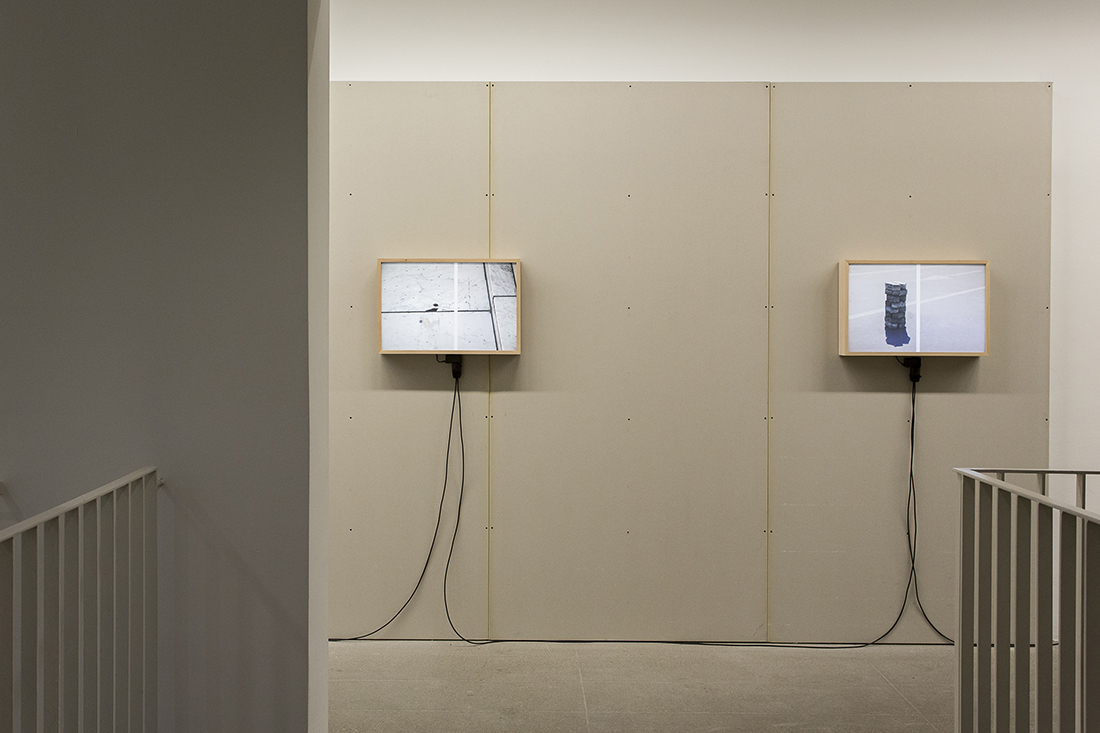 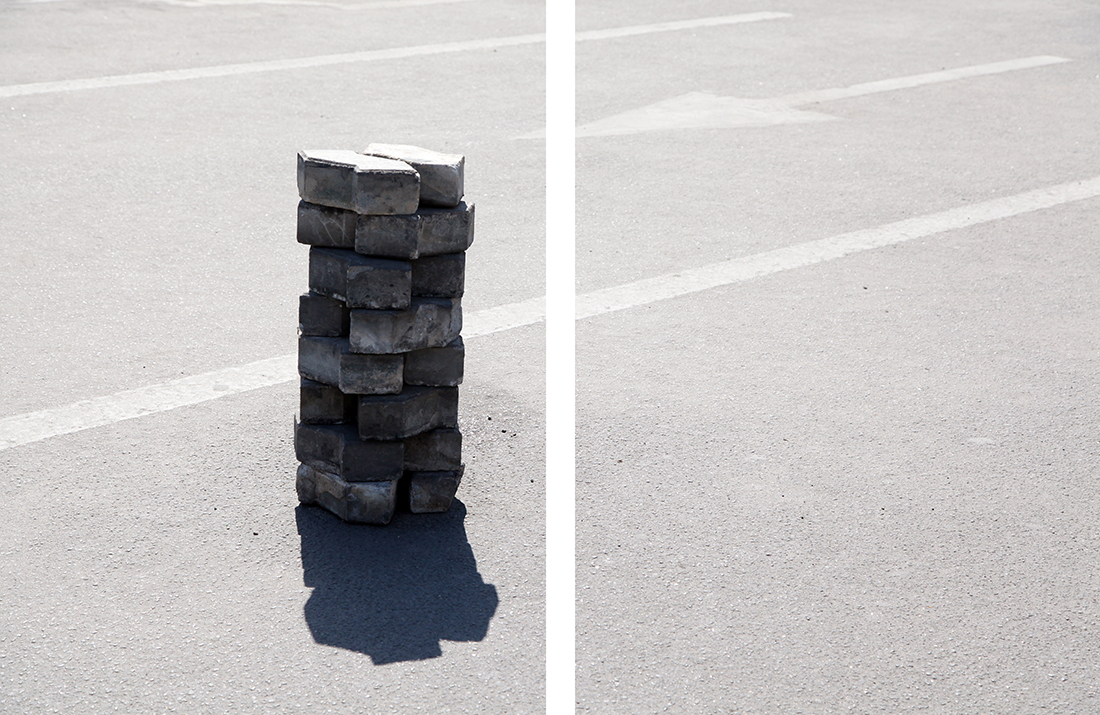 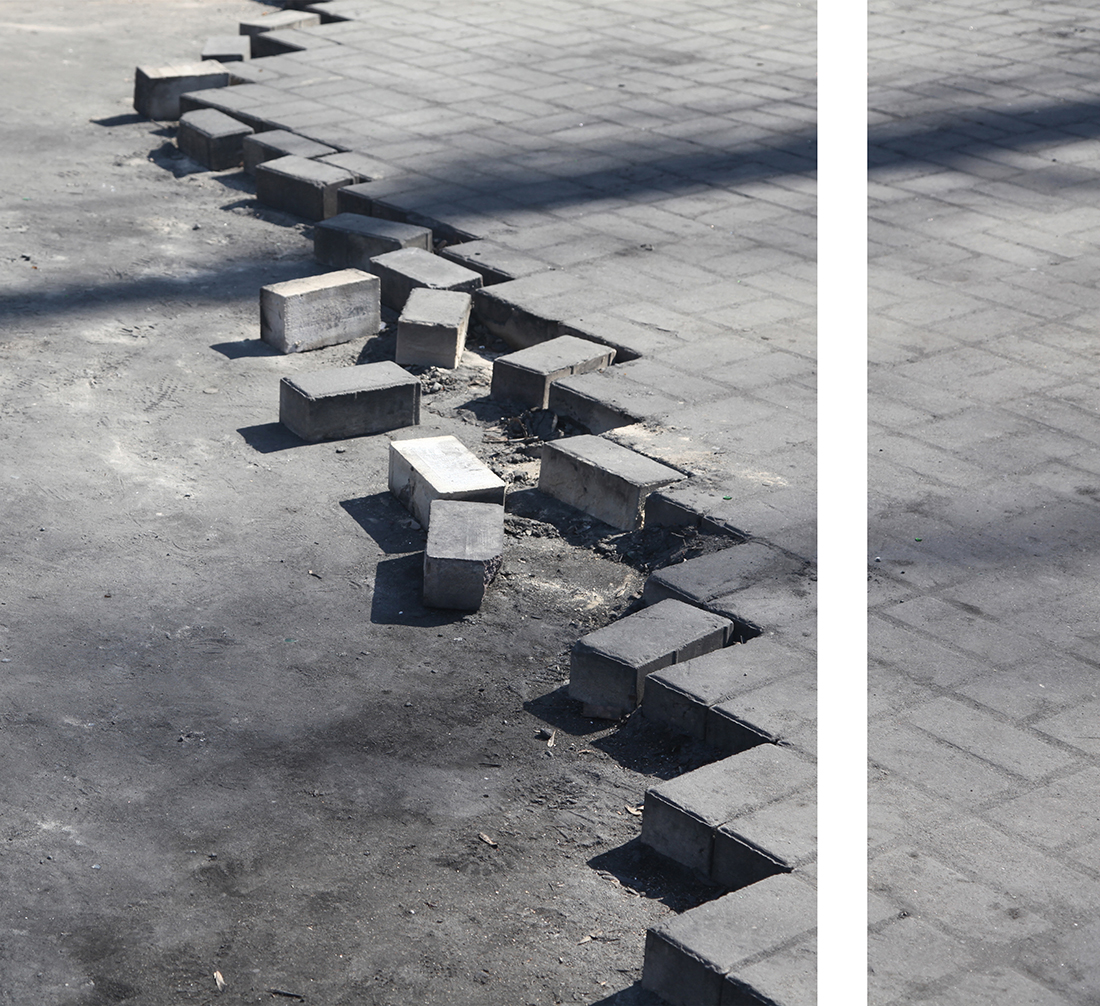 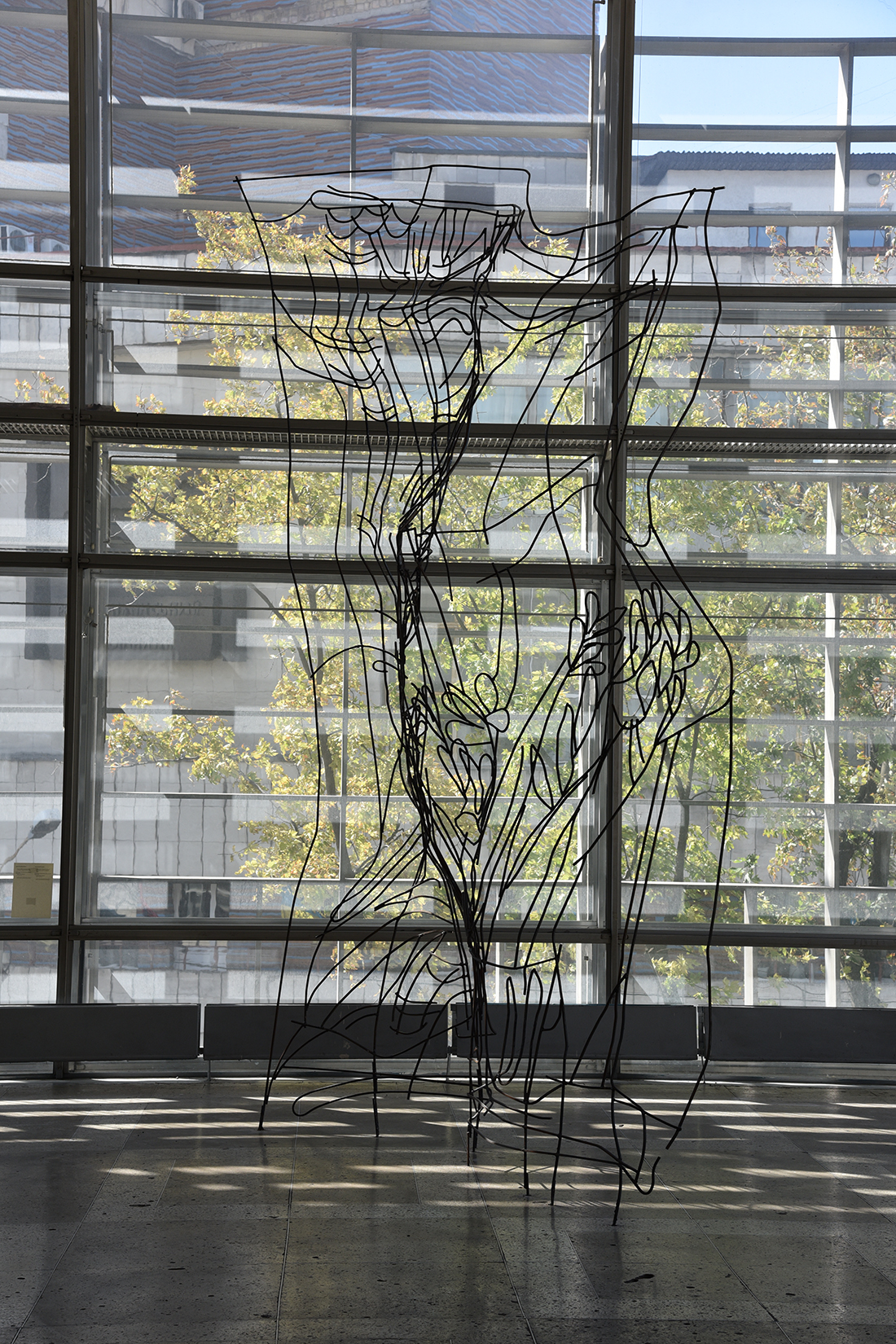 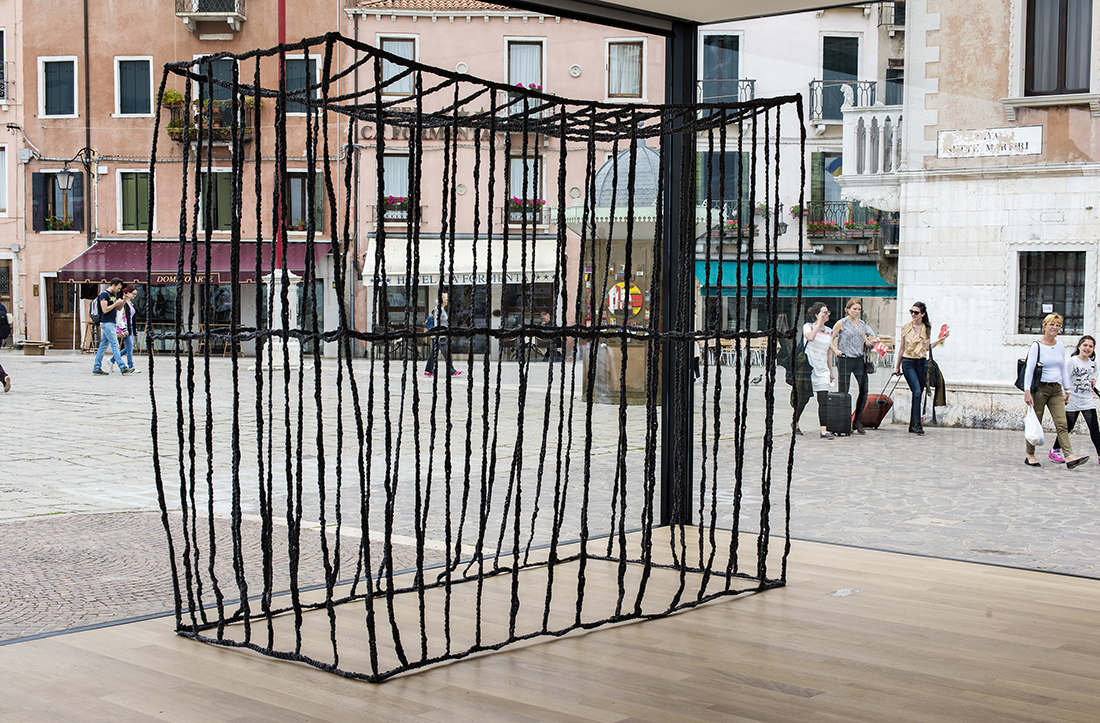 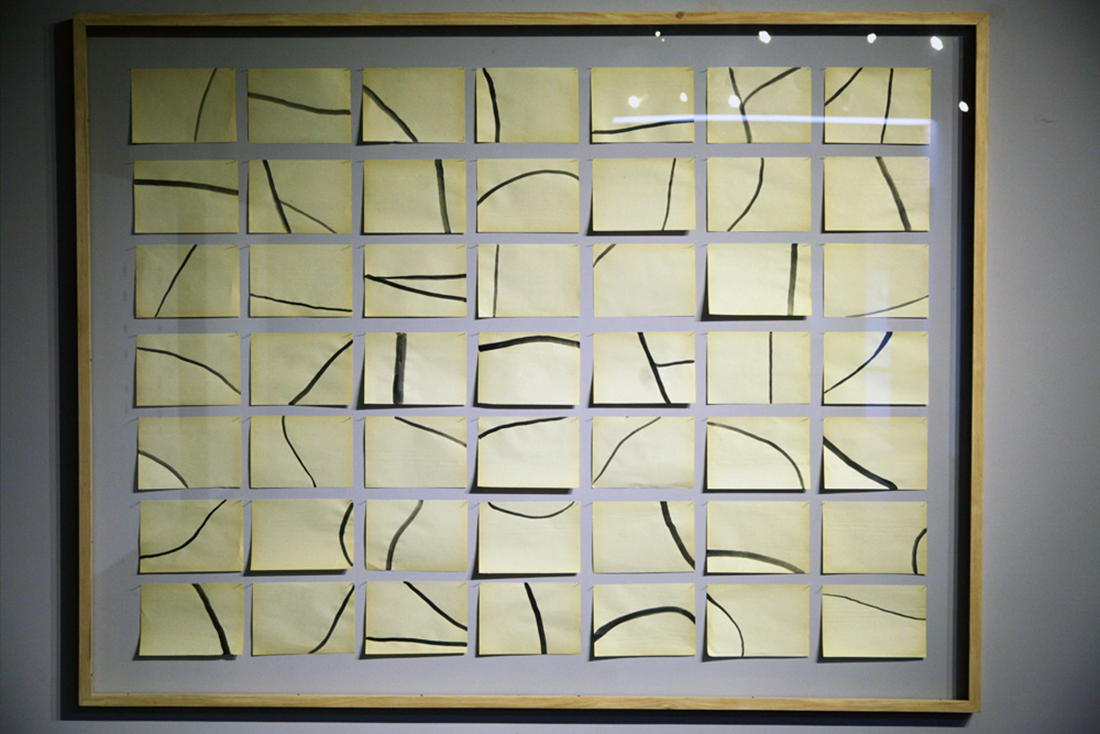