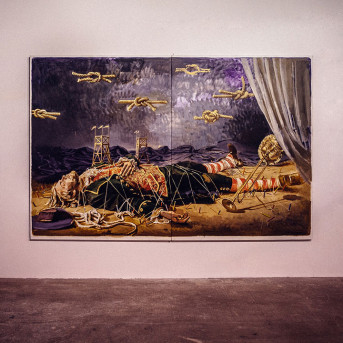 We can’t talk about contemporary Ukrainian art without Arsen Savadov, and with him — without humor, irony and sincerity.

Do you know that 6000 people belong to the National Union of Artists of Ukraine?

Really? Well, then I am the 28th of them, that’s for sure — I joined the Union in the 80s. The rest of them, probably, are somewhere in Sochi… The division in Kyiv consisted of approximately 2500 members. What can I say? They have disappeared… So many artists, but there is no art…

During the protests in Kyiv you were in New York. Has it crossed your mind to stay there?

No, it hasn’t. That’s out of the question. Then I left Maidan only for 10 days, but hid there some stones —and when I was back, I threw them as intended. Of course, I would like to go to some islands — if our oligarchs’ foundations paid for my work. It’s high time they shared. But they aren’t culturally ready yet.

How do you make time for everything: art, exhibitions and protests?

Somehow I manage to do that. I’ve got my magic brushes — I bought them in the market in Turkey. At night they paint themselves…

Tell us about your artwork «Gulliver» that was exhibited at Art Kiev Contemporary and your participation in this forum in general.

I support what Natalia Zabolotna does, because such institutions as the Ministry of culture and Union of Artists have failed. They can resolve only administrative issues, organize some national actions, but art is a personal thing. Why do many artists like «Mystetskyi Arsenal»? Because it’s one of the few representative spaces where we can see ourselves. I would like to support «Arsenal» with my works, especially as Natalia always personally asks me to participate in big exhibitions. I see no reason to refuse. And «Gulliver» — it’s the image of a constrained person; it’s the metaphor that everyone understands differently.

Thanks to you there’s one more place in Kyiv with plenty of artworks. It’s you who won back Pejzazhna Alley…

Why just me? We owe it to hundreds of people — neo-Marxists, nationalists, citizens, neighbors who have been coming to the Alley at 11 o’clock for six months. We stood against the police, and defended ourselves from titushky. They understood that they wouldn’t get any apartments in the house and went away. I am just one of those who saw the need of recreation zone in Kyiv.

Is there a perspective for your art in Ukraine?

No, there is not. But I love Ukraine. In my opinion, the art here is in the situation when institutions have disappeared and the market hasn’t emerged yet. Five years ago the Party of Regions came to power. They have just started to buy works of art, when they have been scattered by the Maidan. But it’s obvious that protesters don’t buy paintings — it’s the wealthy people with spare time who do. Now we’ll have to wait another five years for our new political elite to become rich. Commercial art — not poetic — flourishes in Kyiv. Here’s only one way to exist: if sell your paintings — you survive. This is what needs to be dealt with. And the situation in province is even worse. All life, motivation boil down to commerce, to success.

Big business should invest in local artists, as they do it in China, so that the artists could have a decent look on the world scene, at the auctions.

You may hire dealers, well-connected people, intellectuals (why is it done in business and isn’t done in art?), and they will make a market and a lobby in the world’s art-space for already sought-after works. But this is not an easy job for the artists to do it themselves.

In the era of entertainment art doesn’t have the sacred function it used to have in the Middle Ages. It is directly related to the spare time of a «satisfied» person: this is where a man gains unknown in other «services» degree of freedom, that’s why art’s current strategic objective is captivation (a new point of view). And it should be intellectual captivation, «pushing» (suggestion), that takes us to the new level of «emotional experience», that, in its turn, is related to the conception of «existence» and is the beginning of the conversation on the nature of Reality. This samsara circle is twisted around the categories of aesthetics with the help of postmodern methodology and hooks for captivation and reformation of the object — the cultural object, the Reality. This process is endless, and in the most Dadaistic dreams will be rewarded with the Order of Lenin.

The conversation on the future of my art in Ukraine could be possible if the level of reflection let hold such a discussion in the cultural space. What I see is, in general, «avant-garde for dummies», and individual style is quite rare.

It’s like noticing only a picture in my projects, without a serious social performance that includes all abovementioned conceptions — «captivation», «emotional experience», «existence».

It means that you should find students to reproduce your views.

No, no students. That’s what I was taught: paintings are the best students, they will tell everything about you. Although, I think, I would take on only accentuated personalities. I have experience to share. But the art market is perverted, everybody overestimates own talent, so the students will want to take something from me, but only «decoratively» — they won’t turn it into the base of some ideology.

Who of the young artists would you like to work with as a mentor?

What is your most ambitious future project?

I would like to create a single cultural unit with other Ukrainian artists, so that someday we could compete with any German-Chinese cultural school. Our generation had paid attention to metaphysics in art a long time before them. And that gave «The New Wave» artists a touch of sadness — something that I don’t see in young artists. «There was no sadness, they were just running out of money…»