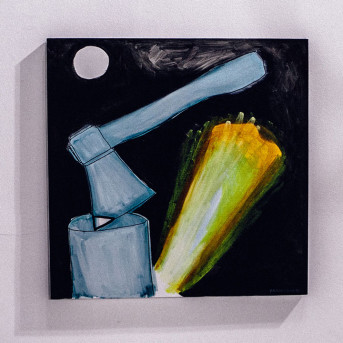 05 Dec Vlada Ralko: “I was always enraptured with the war inside human’s soul”

Metaphors, implications of your paintings are obvious. Why did you refuse to play with the viewer, to use your usual multilayering?

You know, there are those little stores along the highway, where they sell soft toys, bath brooms, icon-shaped rugs and monuments? And those rural stores, where nails, dichlorvos and memorial wreaths lay on the counter along with gingerbread cookies? This adjacency defines the structure of life very capaciously. In a way, it’s improper — we are not used to put such different things next to each other. But many people now are stuck in the extremely obscene situation: some of them are sitting in front of the TV or computer and watching, while others are dying or exposed to deadly danger. The worst is that the bulk of people seem to be weak, stuck in own passivity, in own prudence. And some of them — the active ones— have found themselves on the other side, behind the screen, they have disappeared in another dimension.

This situation can be reproduced neither vaguely, nor in a complicated manner. Here simple, clear, I’d say, literal statement is needed.

In fact, I always was enraptured with this inner struggle — the war inside human’s body that he doesn’t always realize is happening. And if he gradually comes to this, he gets frightened. But with current events this displaced war just became apparent. Specific circumstances got symbolic meaning, as if the senses became obvious, you do not need to search them — just look and see.

In all times artists have portrayed the woman differently: from the Virgin to the woman-revolution. In your opinion, is there a female image least portrayed in the history of art? What image?

I’m confused with this question. I’ve never thought that artists intended to reveal woman’s image while portraying the Virgin or, to say, a milkmaid. I always thought that artist would talk about anything but elements of his statement. What’s the difference what is on the canvas: a woman, a black square or a penguin? The only question is why they are there.

In one of your interviews you said that you didn’t want to romanticize the situation around the Maidan. Your works are an exposed nerve. How do you make up for this emotional stress, how do you escape from it?

Don’t exaggerate about the nerve! Sublimation has nothing to do with art, neither does emotional stress — unless you take the desire to think as a threat to your own tranquility. In that case, I think that excessive concern about your tranquility is hazardous to health, and, as the current situation shows, such concern is also life-threatening.

As regards unwillingness to romanticize the situation — then I had a reason to talk about it. During the Maidan the serious question arose: what is the role of the artist in this situation? It is remarkable that the question was not only about this specific situation, but as well about the problem of artist’s responsibility in general. So there was a possibility to fall for it and glorify the Maidan, because I was its supporter. And if not glorify, then succumb to self-censorship and limit yourself in order not to harm the protesters. That is romanticizing the process meant turning a blind eye to some things that didn’t fit in the system. My «Diary» assumed something completely opposite — on the contrary, to open your eyes and, if possible, not to miss a thing.

Your paintings can be called a shock therapy. What diseases of the society would you like to cure the most?

I think that what I do is far from the shock therapy, as well as from the desire to cure the society. But for some reason a statement, where I clearly and frankly talk about life, death, courage, deed, desire, shame, honor and fear, shocks some people. Immediately a conflict with false civilization arises, because you are expected to ignore some sides of life, to simulate happiness, education, health, success. A slightest thought or even doubt raises protest.

Some artists write books, some intend to become directors… Would you like to try your hand in other field of art? For example, create a collection of clothes…

If I need words or patterns or sound to express myself, I will necessarily use it. The choice of tools is always reasonable when you need to tell about important things in the most accurate way.

I started working on my «Kyiv diary» series, as such precise painting on paper and journal posts’ format currently has become my only true artistic method. Yet there are things that, for example, can be expressed only by means of painting. The paintings I created with oil on canvas couldn’t be made any other way. It’s quite strict — if you’ve got your future statement in mind, the choice is predefined. It’s boring for me to try other techniques just out of curiosity.

What’s your opinion towards creative manifestos? Do you have your own?

I found a Taras Hryhorovych’s quote when showed my first works from the «Kyiv diary» in February.

«Let be what will be.
Whether to flow on or wander,
At least I’ll be forced to crucify myself!
But I’ll quietly embroider
These white pages anyway»